My Husband’s Wife by Jane Corry is a book I’ve wanted to read this for a while, ever since it popped up as a recommendation on Goodreads. I’ve entered Giveaways a couple of times but have been unsuccessful. I finally managed to get my hands on an ARC, courtesy of NetGalley, for the purposes of this review. This book will be released in the UK on 26th August 2016 (I’m not sure about other countries, sorry!), and I’m sure it will be available in all the usual places.

I was drawn to this book by it’s odd title. It evokes so many different questions, and really draws a reader in. It drew me in enough to break my stance on using an e-reader. I borrowed my mum’s Kobo and actually didn’t hate the experience as much as I thought I would. I have read a couple of books on there before, but I always try to avoid it as I much prefer the real thing. This book has made me more inclined to read an e-book again. 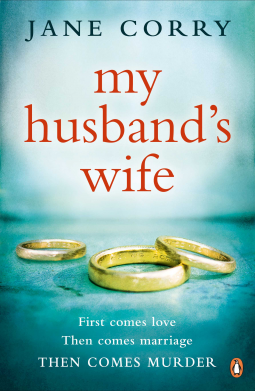 It helped that it was so fast paced and gripping. If you read my review of the last book I read, you will know that it took me over a fortnight to get through, and I was worried that it was just me losing the reading bug. I was so, so wrong. I absolutely raced through this book, finishing its 500+ pages in less than a week.

My Husband’s Wife tells the parallel stories of Lily, I newly qualified and newly married solicitor, and Carla, a young Italian girl who lives in the same block of flats. The story stories cross when Carla’s mother asks Lily to take care of her daughter on Sundays, as she has to work. Lily’s husband Ed, a struggling artist, becomes infatuated with the 10 year old Carla and starts painting portraits of her. Meanwhile, Lily takes on the case of a murderer who is to have a huge effect on her life.

I know that synopsis was terrible, it’s quite a complicated story with lots of different threads, so I’ll give you the official synopsis from Goodreads:

Lily meets Ed at a party, and on their second date, he proposes. She’s a lawyer, he’s an up-and-coming artist. They own a small but beautiful flat in London and mix with all the right people.

But Lily has a secret. Something from her past, that is soon to collide with her present. And she thinks her new husband is hiding something too…

The vows they made will soon be tested to the very limits.

‘Till death us do part…’

It was also described as the next big psychological thriller, although I’m not sure it quite belongs in this category. It is definitely a thriller, but more of the ‘family drama’ sort of variety than the psychological. Somebody on Goodreads described it as ‘Literary Fiction’, but if I’m completely honest, I’m not really sure what that means. All I’ll say is, it doesn’t contain any really shocking twists, or much ‘adult’ content, at least not in detail. It is also far from gory or disturbing in a visual sense, although several of the characters do have some rather disturbing motives. I think it spans a much wider audience than the term ‘Psychological Thriller’ allows it.

I have to say, I was shocked when I discovered that this is Jane Corry’s debut novel. The narrative is very accomplished, and could easily have come from a veteran bestseller. The characters are really what makes the book so good. They are all flawed in some way of other, but somehow, Corry still makes you feel for them. Each character evokes an uneasy feeling in the reader that forces you to question whether all is as it seems. It turns out, of course, that everything isn’t as it seems, but I’ll not go into that.There is a disturbing undertone throughout, and each character is constantly hinting at various secrets that don’t come together until the very end. This really keeps you turning the pages. The story is constantly twisting and turning, with the reader never quite knowing what’s going on.

Now for the negatives; the reason I haven’t rated it higher than an 8/10. The ending wasn’t quite what I thought it was going to be. What should have been the ‘big twist’ didn’t quite shock me enough. I won’t spoil it, but I expected it to go further and be more disturbing than it actually was.

Also, despite it being very fast paced, I did find that I couldn’t really remember what had happened in previous chapters when I picked the book back up again the next day. I had a lot of ‘oh, I forgot that happened’ moments when I was reminded of things from the early chapters. I’m not sure of the reason for this, and I don’t think it detracted from my overall enjoyment, but it’s worth mentioning.

Overall, I would highly recommend this book for a fast-paced, gripping read. Don’t be put off by the genre label, it would suit anyone who is into books from a range of different authors, from Jodi Picoult to Gillian Flynn, and anything in between.

4 thoughts on “Review – My Husband’s Wife by Jane Corry”